BARSTOOL POETRY Your title. My poem. My title. Your poem. 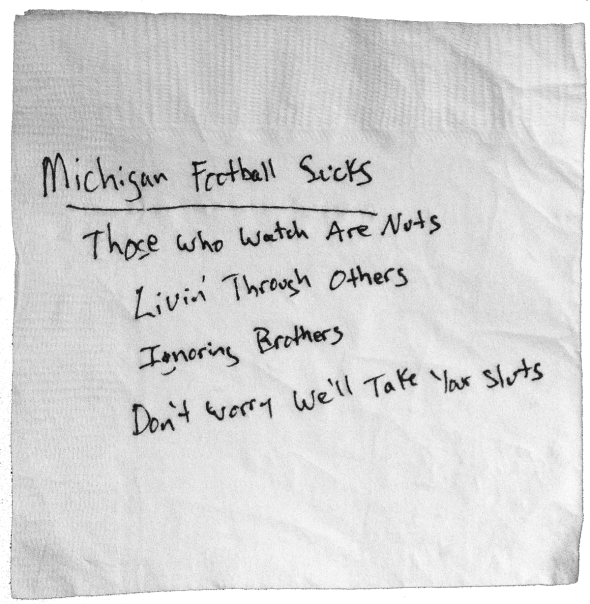 When I woke up the next morning to find there were only 37 poems in that fishbowl, I was slightly crushed. The night had gone so well. To go home with half of what was written left a real black eye on the night.

When I called the Violet Crown on Sunday, the guy on the phone told me everything on our Barstool Poetry table went in that fishbowl and our canvass bag. There were no signs of misplaced poems, no stories of someone accidentally spilling a beer into bowl #3 leading to all the poems getting thrown out, no reports of poetry groupies surreptitiously walking off with the evening’s output. By Sunday night, I still couldn’t bring myself to read the 37 poems that made it home with me. That’s how chapped I was about the missing napkins.

By Monday I was standing in the Violet Crown dumpster, picking through a weekend’s worth of bar trash in hopes of finding the lost poems. Then it started raining. Still no sign of the genius napkins. Only a dumpster brimming with party flotsam, flies, bees and my diminishing dignity.

This entry was posted on September 12, 2013 by Bob. It was filed under Barstool Poems .

Now that the first few volumes of Barstool Poetry are available in paperback, we're looking for a new generation of barstool poets. Don't forget to let us know where your poem was written. Anonymity welcome . . . if not encouraged.

Email or text your napkin masterpieces and drunken disasters to: BobtimysticMedia@gmail.com
Join 266 other subscribers